To me, the difference between a Marvel trade paperback and a manga omnibus is like the difference between a cheeseburger and sushi. While both are forms of comics, the art styles, backgrounds, and stories are so distinct. What I have noticed in public libraries is that while I can tell the two apart, many of my colleagues struggle. After removing all identifying labels from comic collections many staff were left confused when it came to shelving. While you can add extra stickers on the back of items, like an ‘M’ for manga, this defeats the purpose and stops people from actively thinking. This guide will hopefully help staff to tell the difference and feel more confident in identifying manga, comics, and anime.

It also should go without saying that manga, comics, and anime are all media forms, not genres. I will also be refereeing to most ‘Western’ comics as comics to keep things simple.

The main differences between manga and comics are:

Covers of manga tend to look very different from western comics. Apart from the right-to-left reading style (open a comic up and if you see 'STOP! This is the back of the book!' you've got yourself a manga) here are some quick pointers to look out for. 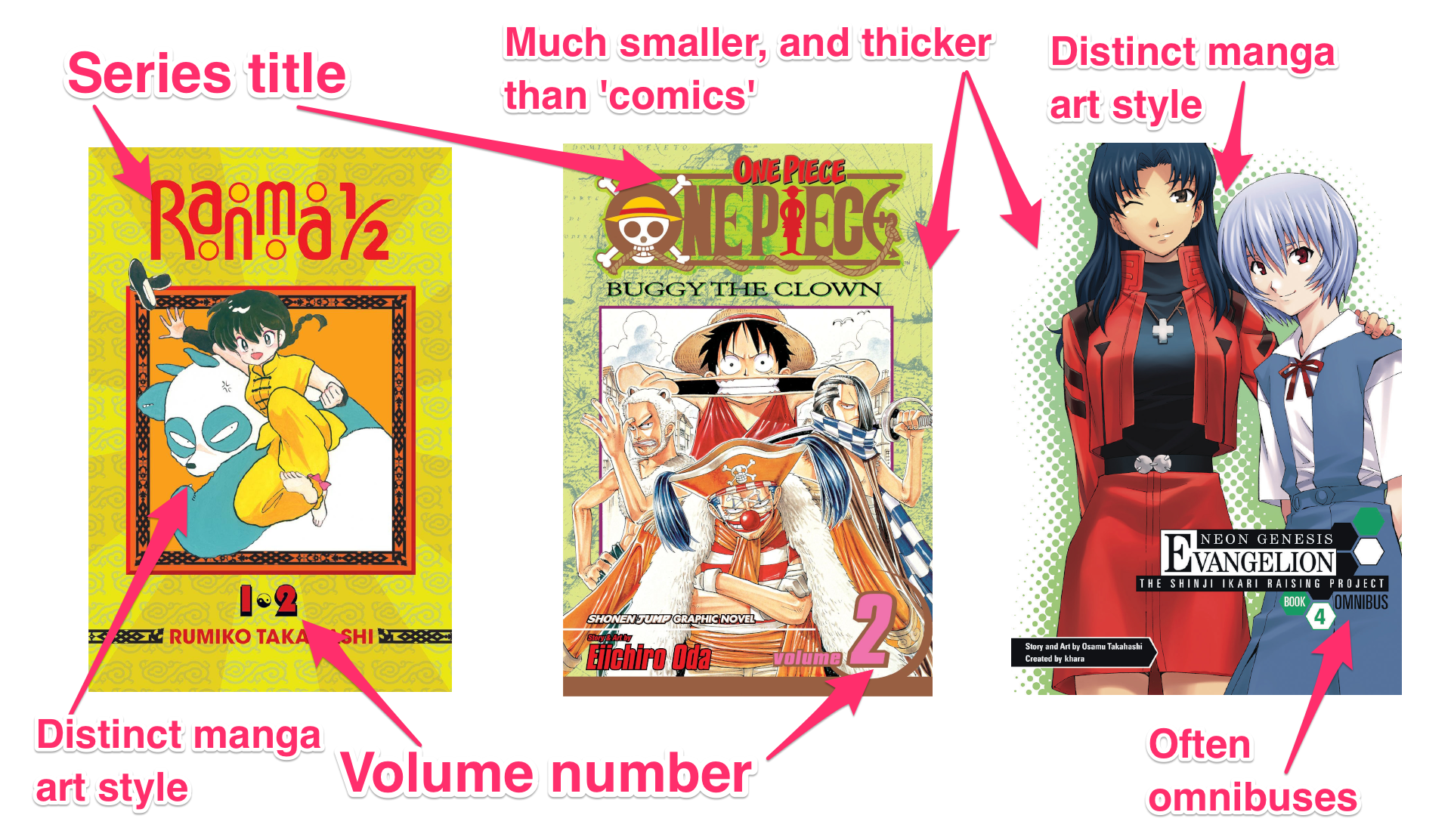 Like most comics, a lot more information is found on the spine. Much thicker than Western comics they contain similar information. The most helpful is the title. Most collections will have multiple volumes so finding a shelf full of Dragonball comics might hint that you have a manga. Knowing popular titles of manga is just as important as knowing the title of the latest James Patterson. 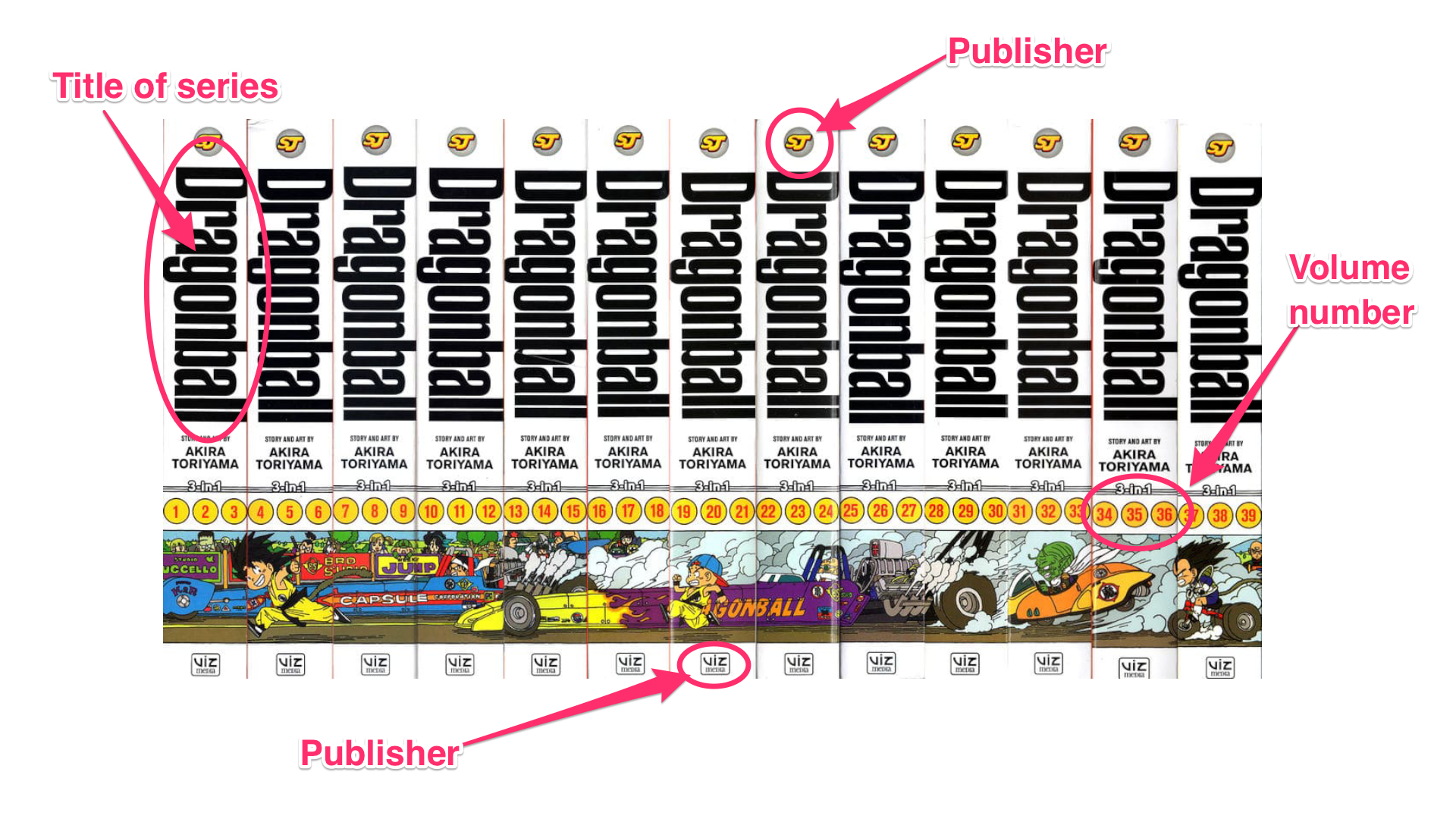 Look at the publisher, for both manga and comics this can give you a massive clue as to what you have in your hand.

Different types of manga exist according to age range (shonen, shojo, seinen, josei, and kodomomuke), as well as genres (fantasy, sci-fi, romance, etc.). You don’t need to know this to shelve them but it helps when doing readers advisory.

The main differences between comics and manga are:

Covers of comics tend to look very different from manga. Here are some quick pointers to look out for. 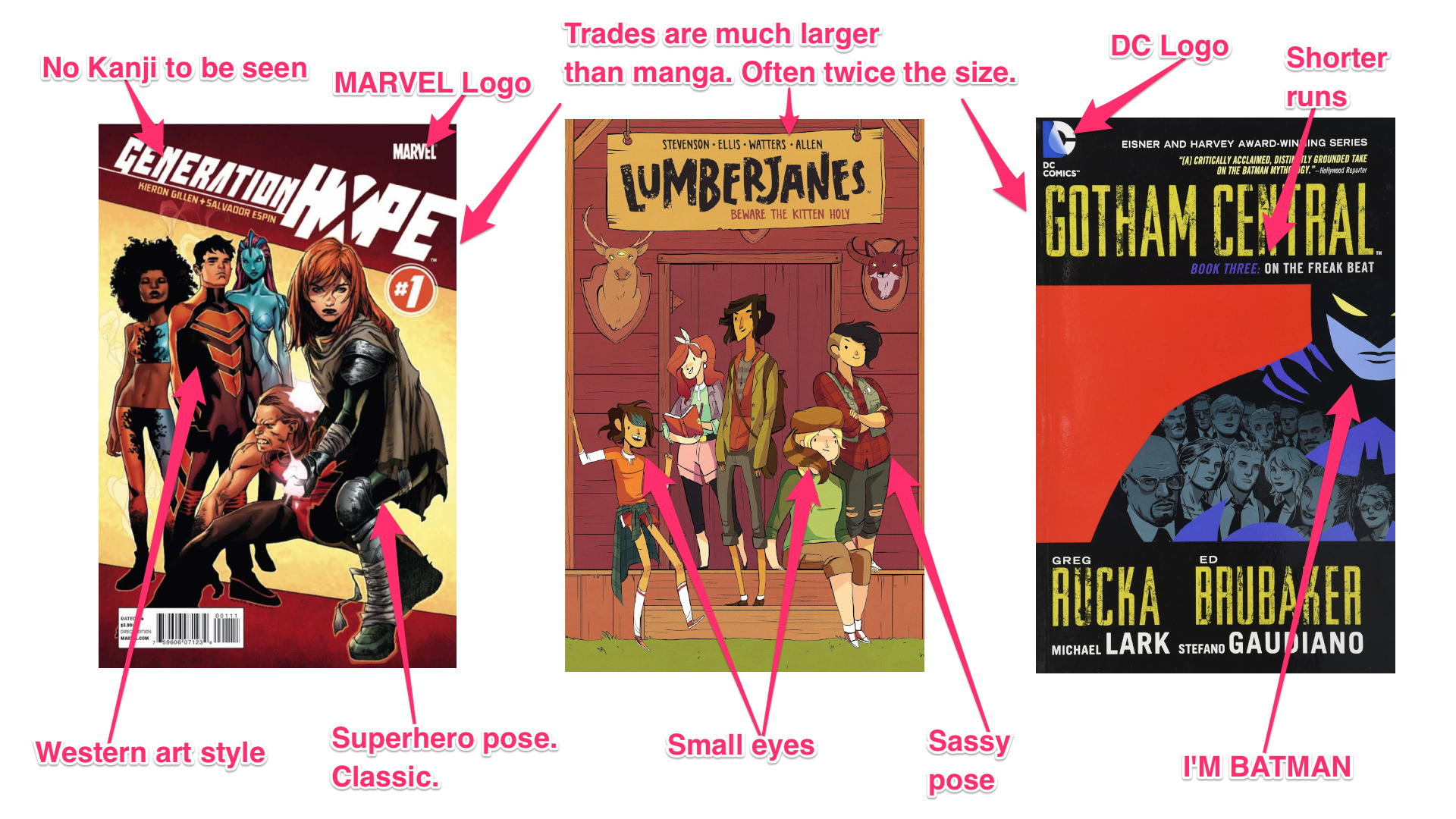 Comics have many different styles, genres, and demographics so it can be very hard to pin down a particular style. This guide oversimplifies a lot to try and give you a helping hand picking between the two. 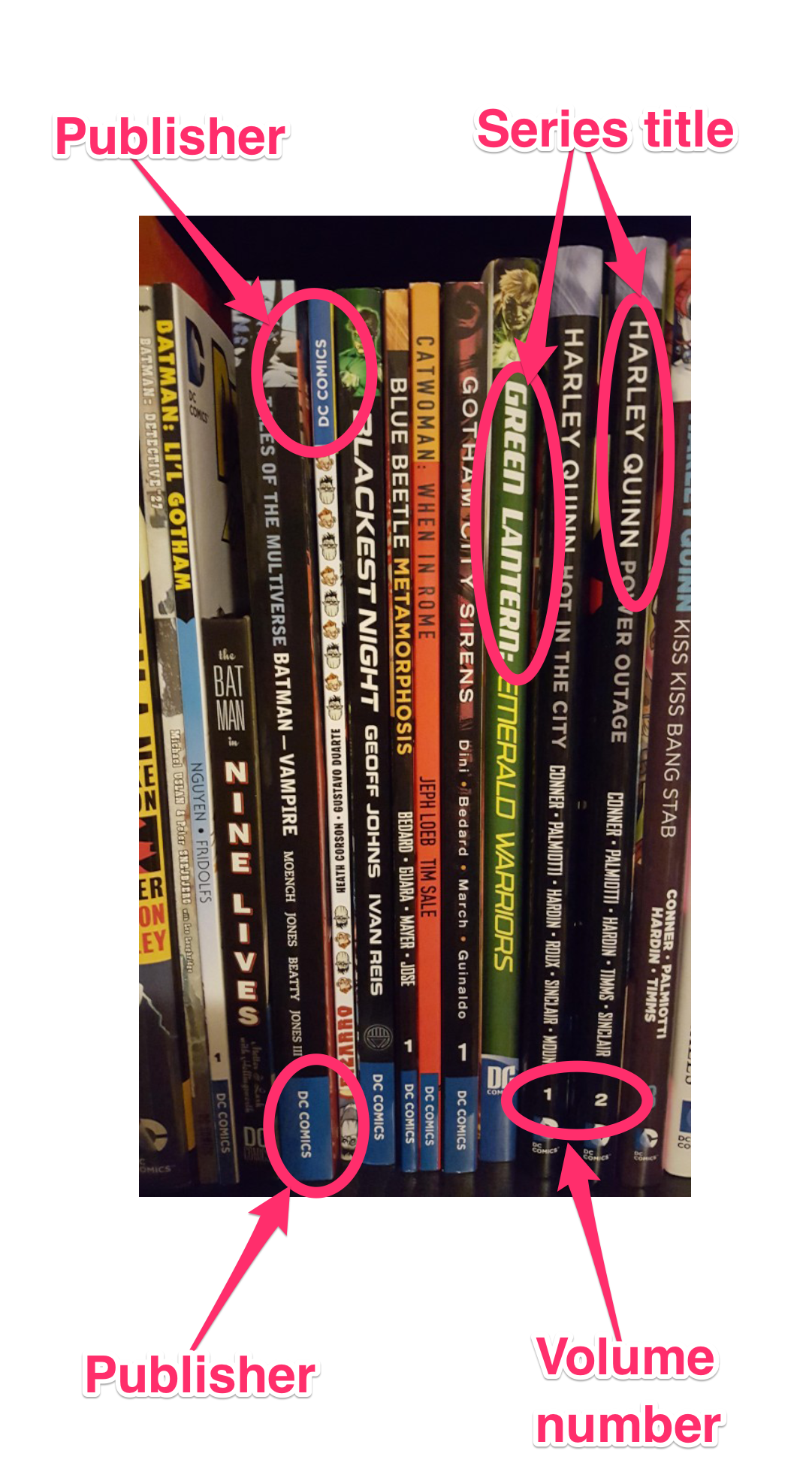 Now you can tell the difference between manga and comics, we can now look at the characteristics of anime. Anime is Japanese animation. Basically moving manga in DVD or Bluray form (or streaming, etc.).

The good news is if you can pick out what a manga comic looks like, you’re 99% there when it comes to anime. 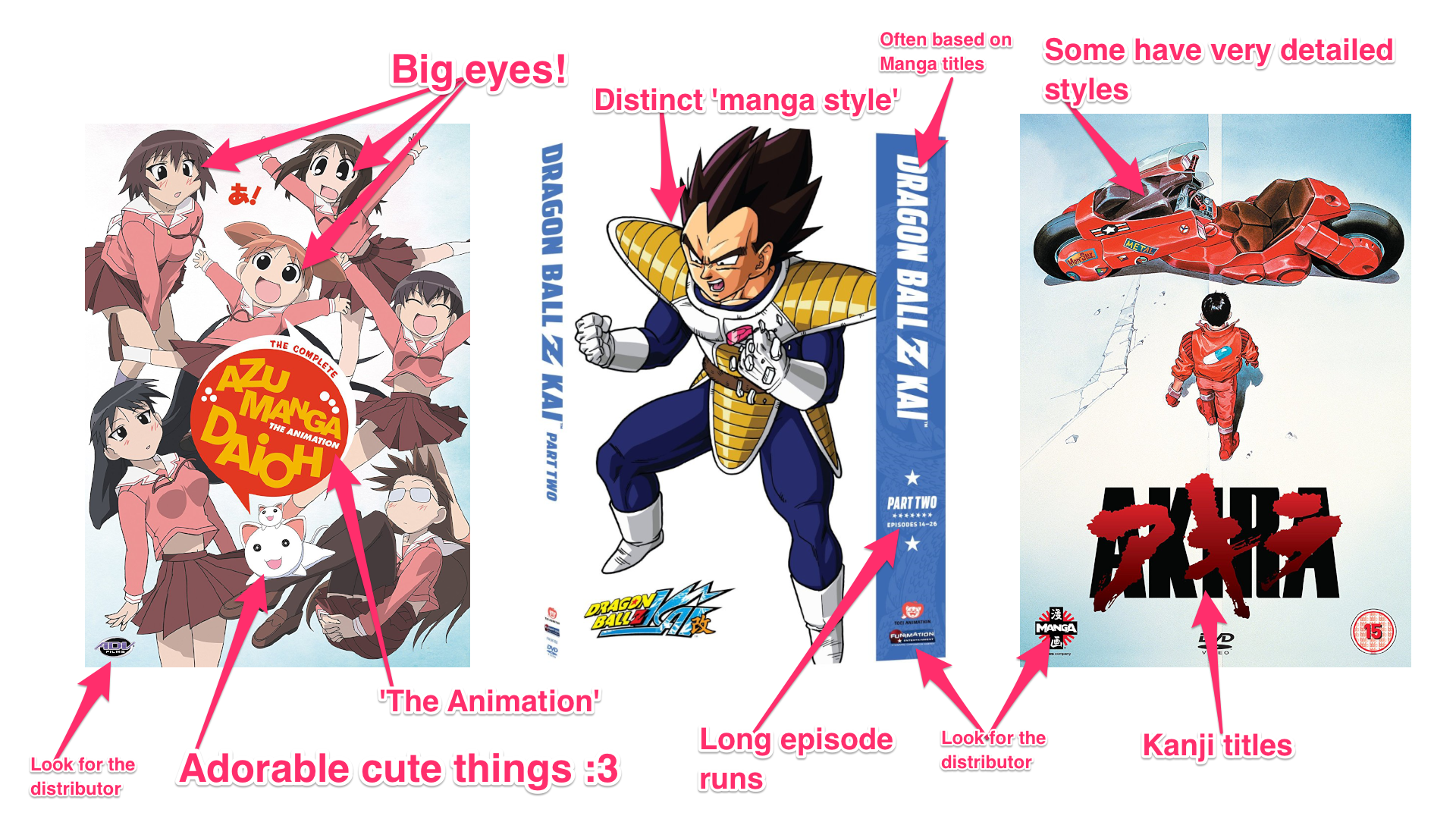 It’s usually the same art style as the manga, and many of the titles come across as popular manga tends to get turned into anime, anime movies, live action movies, and whitewashed Hollywood remakes… AHEM

Popular anime distributors in Australia are:

They also come with a ‘Japanese Language’ spine label for our collections. Be careful however, as not all Japanese movies are anime!

An amazing resource for streaming anime is Madman's AnimeLab. It's free and streams all your favourites and new series you will soon love. Add this site to your reader's advisory list when clients are looking for anime you don't stock.

Feel free to use this in your own library, and hopefully this can help your staff.

All Right Stop, Collaborate and Listen