Comics for life, yo In case you didn’t know, I’m a bit of a comic nerd. Every public library I’ve worked in I’ve made it my

Comics for life, yo

In case you didn’t know, I’m a bit of a comic nerd. Every public library I’ve worked in I’ve made it my personal goal to leave the comic or ‘graphic novel’ (they’re comics people, be proud!) section better than I found it. Starting with something as little as begging the collections librarian to take me shopping, to arguing to have an adult comic section, I’ve always pushed for comics in libraries. For years I’ve been looking at ways to improve the way we organise and display comics in libraries. 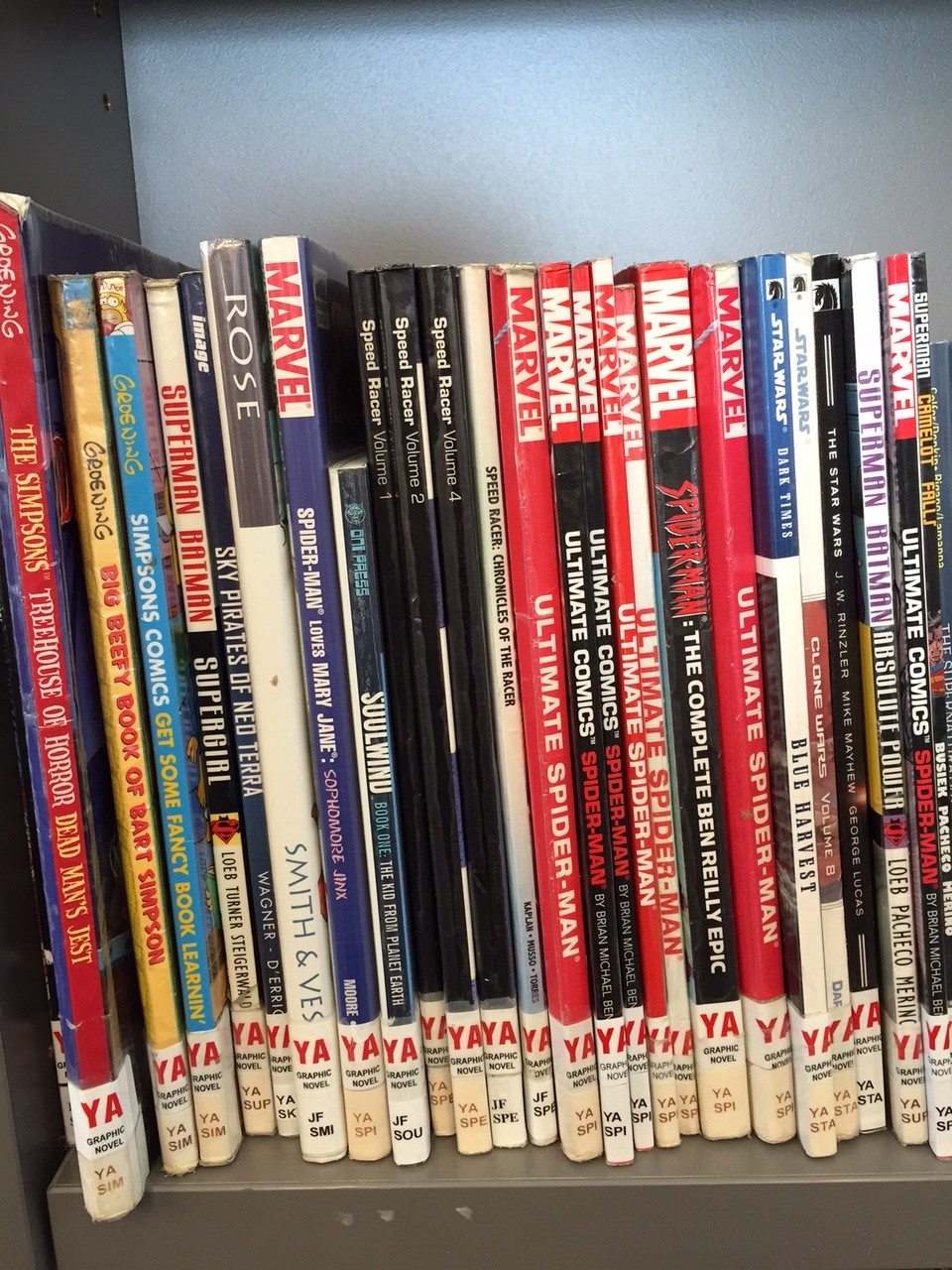 A previous library I worked at decided to arrange their comics by series, creating spine labels with the first three letters of the series name. In theory this works well. All the Spider-man and Batman comics are next to each other regardless of creator, and the single author series remain together. When I recently went back to this library I had a look and the shelves struck me as untidy, but this may be because of my inherent, anal retentive, librarian nature. The other thing that happens, regardless of author order or series order, is important information gets hidden by spine labels. Which volume follows on from which? What order should I read them in? Often with comics, the volume number only appears in one place, the bottom of the spine. It wasn’t until I went shopping for new comics that I stumbled upon a solution.

After spending the better part of a day buying comics at all the local sellers (a joyous task), I suddenly realised what every shop was doing: they were arranging books by publisher first, then title/series. Now I’ve been buying comics personally and professionally for decades, so of course I knew this but I’ve never applied it back in the library environment. To me this made perfect sense as each publisher (Marvel, DC, Image, etc.) tends to publish particular types of stories (see imprints like Vertigo) set in a rich world built up over time (e.g. The Marvel Universe). Another advantage is finding similar titles and cross over titles (where characters from one series appear in other titles) in the one section.

My first thought was to reach out to @drmatfinch, someone I knew who would have connections and ideas about this.

@DrMattFinch have you seen a library comic collection sorted by publisher then title? Thinking of trying it out.

Of which he did:

I think @wcl_library do this in their collection on the ground floor, @edwardshaddow? Makes a lot of sense to me. https://t.co/KCrajqw2Ft

What was interesting though was the resulting conversation and counter argument to this style by @jackslack (Sean Riley) who presented some valid points to the argument.

@DrMattFinch @wcl_library @edwardshaddow By contrast, I'd argue against. We'd never even think of doing this with films; novels. Why comics? 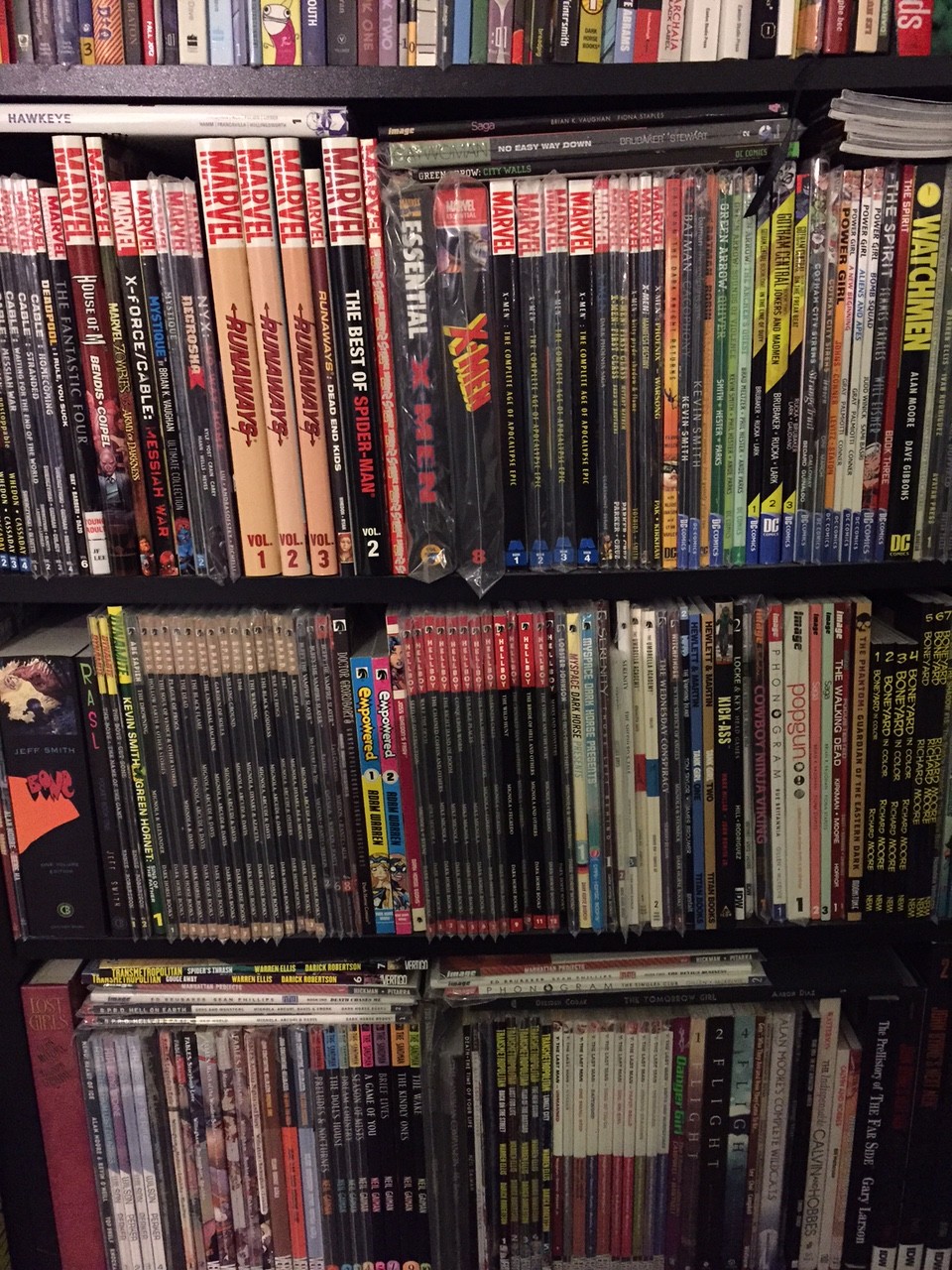 A small section of my own personal collection.

Matt was kind enough to storify the resulting conversations in which Sean expands his concerns and is well worth reading. It’s probably also well worth pointing out how truly awful comic publishers are, which will help you understand Sean’s comments. For me though, after thought and research I decided to try out the idea in my library. I’ve always been motivated to put collections and materials where people would look for them, it’s the mindset I have when creating DDC numbers and laying out shelving, so to me following in the booksellers footsteps made sense. The thing that sold the experiment though was when I went home and looked at my own extensive collection. At some point when I moved into my current house I had ordered all of my comics by publisher then series title! This sold it, if I had arranged my collection this way then I was sure others had as well and it made sense for my library’s collection to be arranged the same way.

Time for a change 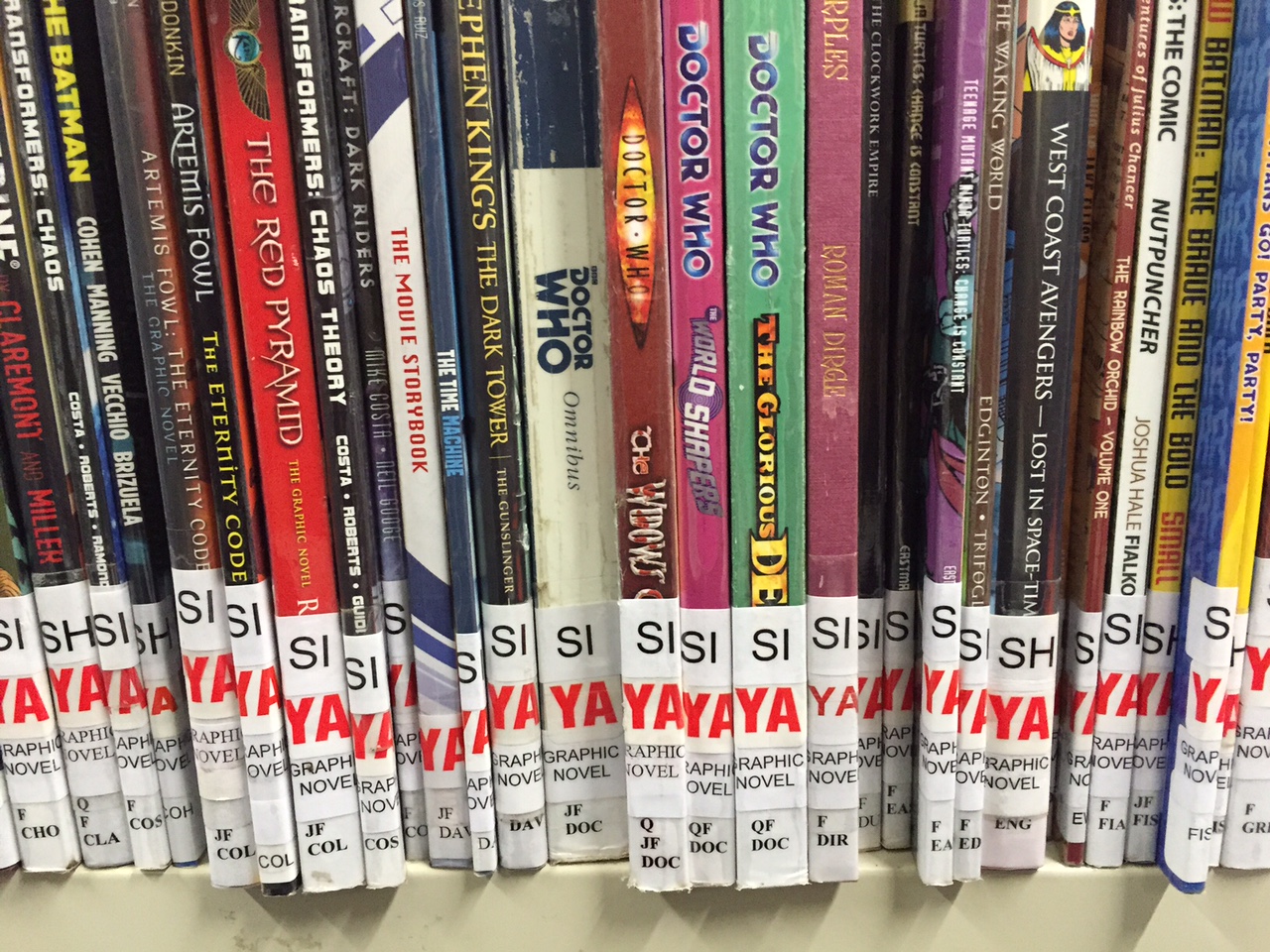 Decision in hand I started by looking at the publishers on all existing titles and pulling out the larger names. From this I created a sheet of spine labels with the names/logos of all the major publishers, as well as a generic ‘INDIE’ and ‘OTHER’ for all those who fell outside of the major publishers (the creation of the INDIE label was to avoid having a massive OTHER collection, it also keeps likeminded publishers together). Manga titles and our junior collection were left as they are for now (our manga collection was already separated). At one point, I realised that the majority of titles had large, easy to read logos on the spines and the labels would be superfluous (apart from the OTHER and INDIE labels). I also looked at the other spine labels currently on every item which included a ‘SH’ (Super Hero) or ‘SI’ (Special Interest) sticker ‘helping’ people find comics relevant to their interest. There was also a sticker telling us that the item was an ‘Adult Graphic Novel’ or ‘Graphic Novel’ along with a YA sticker if appropriate. Since we were going to be shelving by title and publisher the call number label wasn’t needed, the SI and SH labels were irrelevant and the graphic novel sticker was redundant (most trade comics look very different to fiction books). The only sticker that needed to stay would be the YA to help staff differentiate between the young adult and adult comics, which we could move to the back cover of the item, close to the spine. Now our comic collection was free from the oppression of staff induced spine labelling!

With this decision made, I set my staff the fun task of removing the spine labels from all of our young adult comics. The adult collection would follow and any new stock coming in would conform to the new standard. To make finding items from the catalogue easier we changed all the call numbers to the publisher and first three letters of the title as it appears on the spine (eg. MARVEL SPI or DC COMICS BAT). To date we have completed about 80% of the young adult collection and around 15% of the adult collection (mostly new items processed in the new standard). An added bonus of changing the call numbers is that I can pull up queries and see how many Marvel titles are on loan or any other publisher. So far I haven’t seen a huge spike in loans but sometimes changes take a while, so I will be looking at the loan stats over the next few months. More importantly I’m looking at how patrons access the collection. 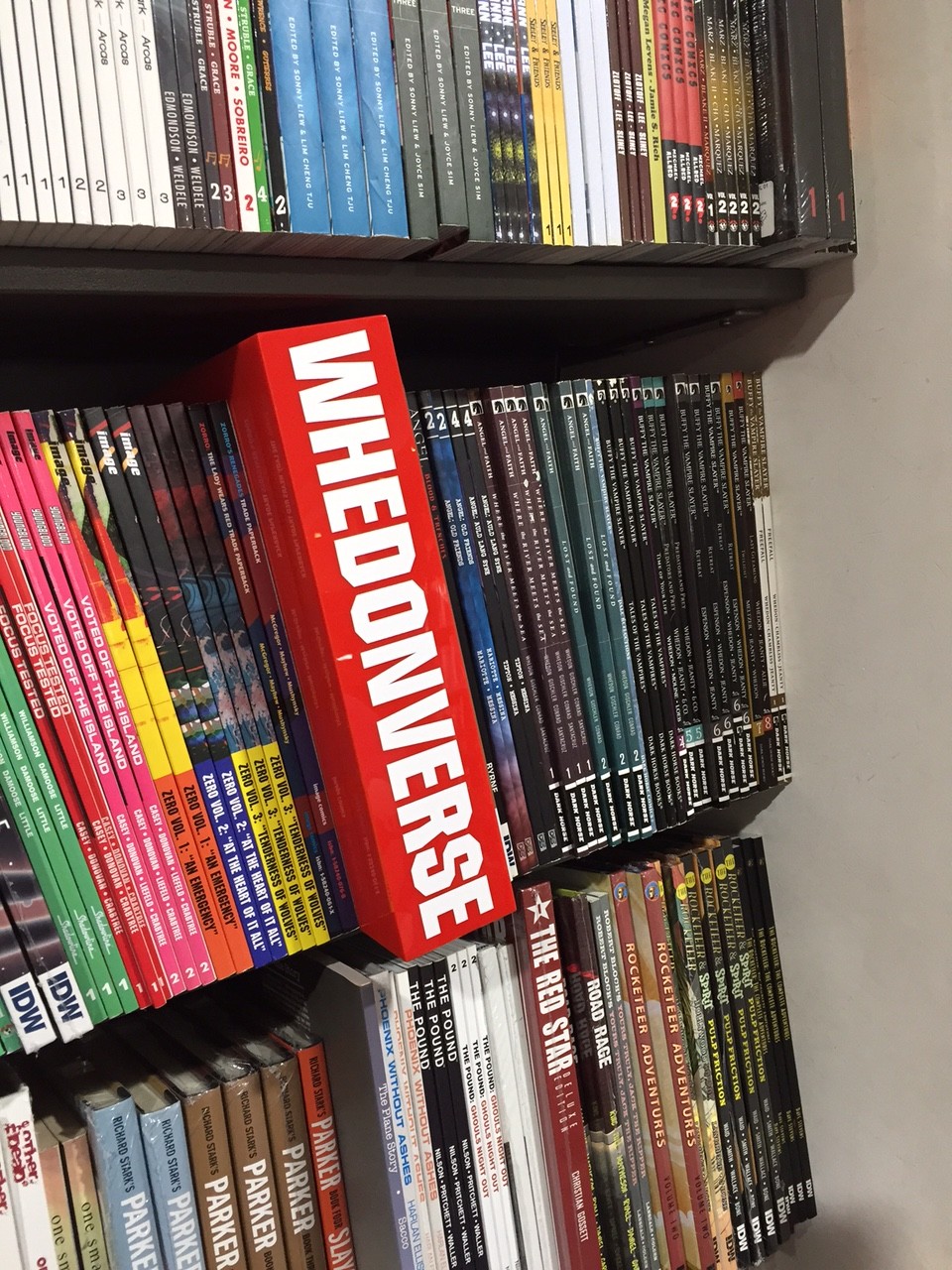 Found in Kings Comics, Sydney. This is a genre I can get behind.

Since implementing this system I have had several patrons ask after specific comic characters. “Do you have any Spider-man comics?”, “where are your Iron Man comics?”, and similar questions get asked frequently. Instead of having to run to the catalogue and preform a keyword search for the series title and point out several places the one series could be, I can simply point to the section and say ‘here you go’, also you might like these other titles where that character features. To me, this change helps clients not only discover their favourite titles but new ones in the same world. While Sean’s comments ring true, I tend to see publishers almost as a genre (however bad this idea is), you know what you’re getting when you pick up a Vertigo book or an IDW trade, and it encourages branching out into other series. 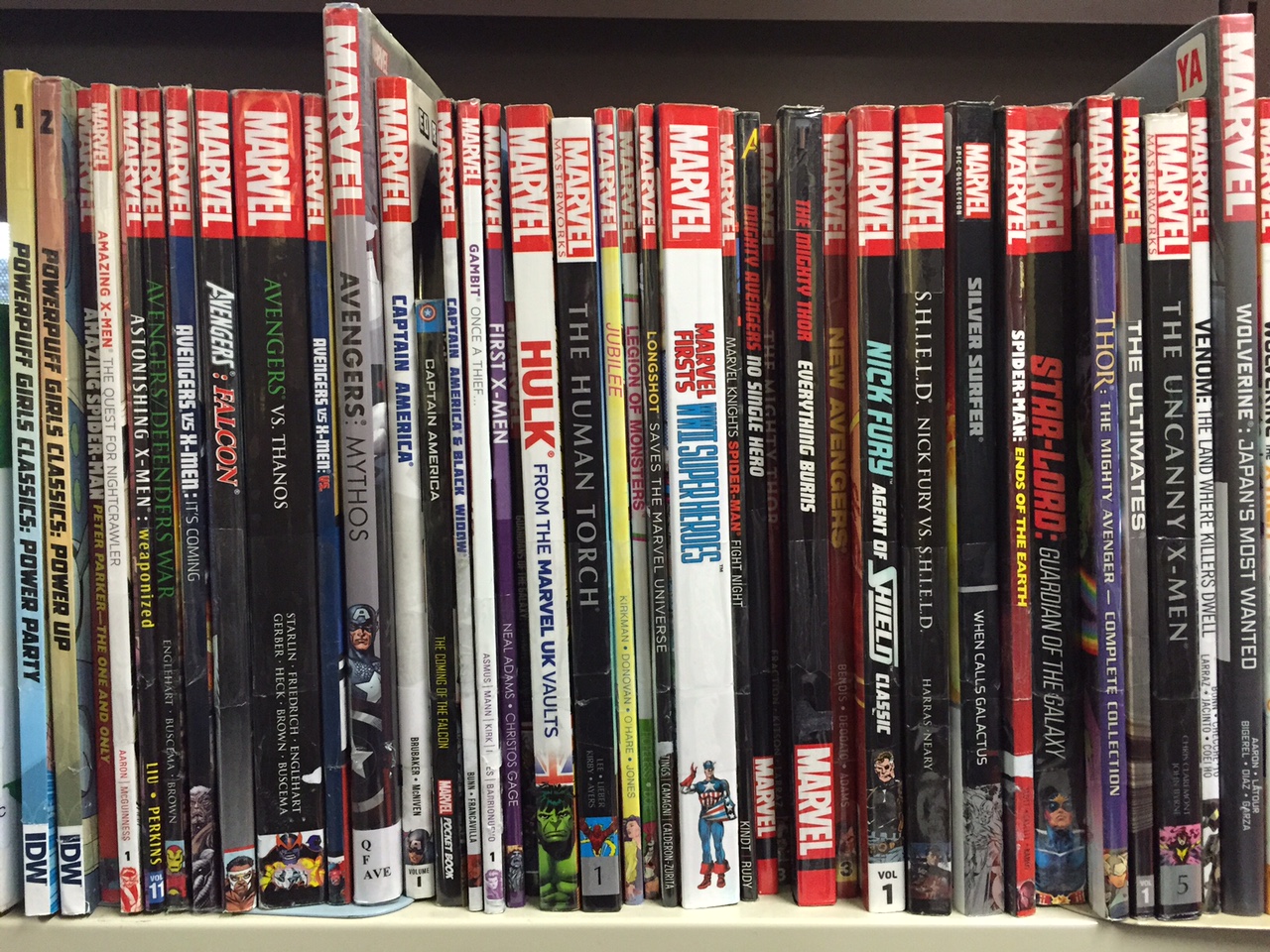 How they are now.

What has struck me the most through this process is how much useless information we attach to library books in the name of ‘helping the client.’ Every opposition from staff came back to them not wanting to think about putting items away. Spine label information makes sense to library staff but in most instances covered up information important to the reader (volume number, creators, even the title!). Most British libraries don’t use spine labels for their fiction collections at all, instead they use the information on the spine and leave books clean for users to browse. When you put the user first and work your processes around them you can create a better experience. Hopefully my little experiment works and my users find it easier to find the titles they want to read or discover new ones they haven’t seen before.

Until next time, Excelsior!